A COUPLE OF PUBS

Continuing on from yesterdays post:- after leaving KINGS WHARF  we walked up to THE LORD NELSON pub for a couple of beers. They where in the process of setting up for a private do and the bar was going to close to the public about ten minutes after we got there and so we had only time for the “one” I am not a big fan of this closing pubs to the public to hold private functions, I would have thought that an area would be retained for their regulars and others but I suppose it brings in the big money.  Had a 2IC  BROWN ALE 4.8%  and a QUAYLE ALE 4.4%         So we crossed the road and looked in on the CAPTAIN COOK HOTEL, had a DISCOVERY PALE ALE 4.9% Moved on to THE HERO OF WATERLOO, had a couple of  ” THE DUKE OF WELLINGTON LAGER’S then had a GUINNESS which seemed to be a favourite in this pub and was poured pretty well. While it wasn’t in the plan we where dragooned into a quick tour of the old and historic cellars. Turned out that this was the most interesting pubs so far. Next pub was the HARBOUR VIEW. Still pretty early in the day and this pub was totally empty when we got there so we had one beer and went to our next stop the MERCANTILE HOTEL, Confronted by a completely disengaged bar woman so one was enough here

Then came THE OBSERVER; THE ORIENT ; THE FORTUNE OF WAR which brought us to HARTS where we had intended to eat but that wasn’t going to happen, while there appeared to be room at the tables they all appeared to be reserved and when had no sooner sat at one empty table a bar woman moved us on so we finished the beers and moved on out. We had a a feed at the Burgers and ribs then a last beer at one of the outside bars (didn’t notice what it was called) opposite the Circular Quay station for the trip home

Other beers in no particular order and between the two of us, ENDEAVOUR 2016 RED ALE. QUICKDRAW   PALE ALE FROM QBREW; KILKENNY; MOUNTAIN GOAT STEAM ALE RUBY TUESDAY 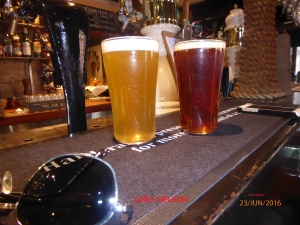 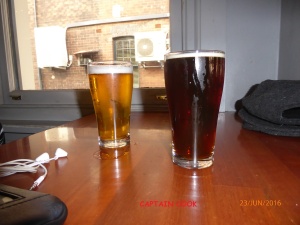 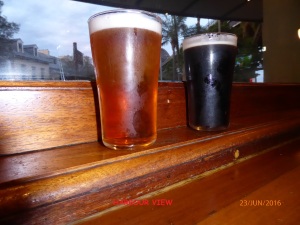 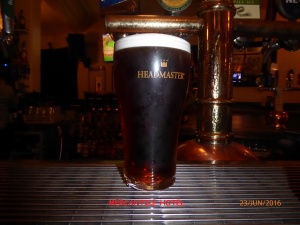