ONCE MORE UNTO THE STATION BAR

Having an afternoon beer at the Station Bar.

A MURRAYS BENNY BELGIAN RED ALE (NSW) 6.5%, as you would expect, a reddish honey colour, fairly hoppy somewhat malty but not sticky so I had second one.ee
BREWCULT SPOILER ALERT PALE LAGER 4.5% (Vic) Fruity hops aroma and taste, very pale and not much carbonation in these, some bittering but not excessive which does last for a while after the beer is finished.

MOUNTAIN GOAT/MATILDA BAY ABBEY COLLABY 2014 BARLEY WINE 10.6% A pronounced nose, I think something like brandy soaked fruit, maybe raisens. A taste I thought hard to define, has a bite to it, not a heavy beer to drink, at least in small measure, sticky mouthfeel, a bit like an orange marmalade. I am trying to define the residual taste when the beer is finished, and all I can come up with is treacle,ly with a hint of peat. 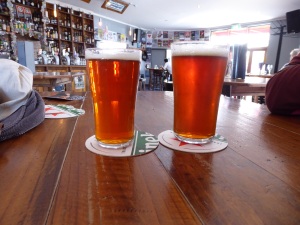 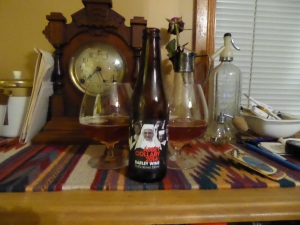