From the East Sydney Hotel we walked to Bitter Phew which wasnt orriginally intended.

Brewcult Full Metal Anorak 5.8%    I thought this beer had a bit of a sour taste but this didnt make any less easy to drink.

Victory Golden Monkey Triple Belgian 9.5% a big beer which deserves more but i didnt make on other notes on it,  so from their site:    Strong and sensual, this golden Belgian-style ale glows with goodness. ,,,,,,,, of imported malts and Belgian yeast are tempered by a sparkling approach and overall light body. Considerable depth of character with abundant, herbal, fruity notes make this one to savour.

Omnipollo Nebuchadnezer IIPA a very nice beer From my note from my blog 22/04/2014 Omnipollo Nebuchadnezzar Imperial Pale Ale, strongly hopped ale as the name suggests, more hoppy than I usually go for but if you put much trust in the beer rating sites it is among the best for its type.8.5%

Kooinda Black I.P.A 7% a bit bigger not so easy to drink, (more on this in another post)

Brew Cult Keep On Trucking  Red American ipa 5.8%, four malts in this beer to go with the four hops   Thats it for this edition of pub Crawl, if there is any more I dont have any notes

Aa a wrap up as far as the pubs go, the Old Fitzroy and the East Sydney where my favourites with the Old Fitzroy having the better selection of different beers on tap.The Bitter Phew, as bar, had the biggest range overall. Though this place was a bit excess to requirements added to the pubs. 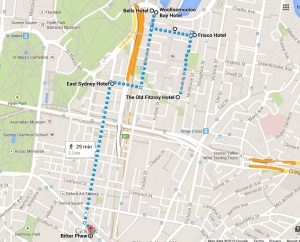 This entry was posted in PUB. Bookmark the permalink.