FLAT ROCK
I went to the Flat rock Brew Cafe for their beer and cheese matching event last night. As usual I got there very early so I had a couple of beers while waiting
and snacked on a bit of pork pie, very tasty if a tad expensive and of course I would have liked a bit more around it.
There was plenty of pork pie but maybe a pickled onion and a hunk of cheese, though I did get plenty of cheese later.
I had a pint of Flat rock Brown Ale hand pump,,, very dark has an almost spearmint / choc mint biscuit taste
A pint of  Flat rock English Bitter ,, nice beer a
and a small glass of Flat rock barrel aged  Scotch Ale, almost a stout I thought , I think that this beer is even  better than the brown ale

The cheeses where all good, most cheeses are all good
First a  camembert,
Next a chèvre, a goats cheese
Queso Mahones from Majorca
Cantal  from the central  region of France
Wensleydale
and a Shropshire,
and that adds up to more cheese than I should eat but not as much as I would like to

The beers started off with a rather sweet Lindemans Cassis a Lambic fruit ale from Belgium; 3.5%
next a a Hitachino Nest Beer 5.5%
a white ale from Japan I thought it was easy to drink possibly the hardest to work out, maybe the most interesting of the selection. Kiuchi Brewers
Citra 4.2% from Oakham brewery Peterborough UK, any beer with grapefruit notes cant be bad;
Bengali Tiger from Sixpoint; 6.5% The Sixpoint site doesn’t say much about this beer
Moondog Marmaduke double IPA 8.5%, not over the top hoppy
Heretic Torment 10%. Belgian Quad. I thought there was a very slight hint of salmon or smoked kippers in the taste.

There was some discussion about the difference of the beers from the west coast compared with the beers from the east coast of America.
I don’t know all that much about American geography, but seems as though the American beers we had where East Coast beers
and I felt that they where much better hopped than most of the American beers I have had to date,
so it seems as though I am an East Coast man when it comes to beer.
I would like the people who run these events have notes available of in this case the as my recollections may not be all that accurate
and I sometimes cant read my own notes.
Maybe providing this at the beginning of the presentation might ruin expectations spoil the fun of the event
but I would like to have a it of a record of the  events available,at least at the end of the do.

And before all this I stopped of at the Rag and Famish for a new beer for me, a Yenda Hill unfiltered lager.
The young lady behind the bar could tell me very little about this beer other than it came from Yenda
I also found the internet a bit misleading but if I got it right the beer comes from “The Australian Beer Company”
which appears to be collaboration with Coca-Cola Amatil ( CCA ) and Casella Family Wines,
and CCA apparently hopes to become the third or fourth-largest player in the beer market.
I read this from a Google  entry dated Novemeber 2014. I seem to recall CCA had pulled out of the beer market when it.
If it gets its way that will make their brewery as big or bigger than Coopers.
That sort of suggests that the Australian Brewery Hotel, at Rouse Hill  http://www.australianbrewery.com is owned by CCA 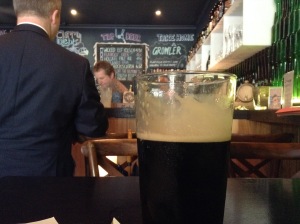 This entry was posted in BEER AND CHEESE NIGHT. Bookmark the permalink.