I went to a beer event last night held by the Leura cellars; International Beer Collection and Hillcrest Coachman, a restaurant in Leura. This place has recently changed hands and is now going to be run as an authentic Belgium restaurant, today being its official opening day. The food very good but nowhere near enough to go with the beers with only three very small portions which meant that the food was finished with still four beers to go.

The beers where Emelisse from the Netherlands and Troubadour from Belgium, and presented by Jason from International Beer Collections (or collectors). Ranging from 5,7% to 11.2% a.b.v. I would say they where all high alcohol beers, with the last four beers of the night being two 9%’s, a 9.2% and an 11%, to my mind it was to much and I would have liked to see a couple swapped for something a bit less. As it was estimated that if you had a taste of all the beers it would have totalled seven and a half standard drinks, and if I have worked it out correctly that average 8% per glass.

On their own all nice beers but all together a bit over the top I thought.

I also  think that tasting notes or a description of the beers would be an advantage at events such as these. 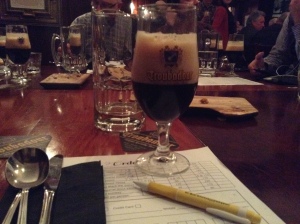 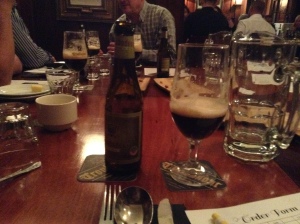