MY FIRST NIGHT AT THE GOOD BEER WEEK MELBOURNE 2014

The Cookie Bar
Rogue Beer The Beard A Belgian style Goulden and it is clearly. Belgian type beer , apart from being very expensive at $14.50 it is. Nice beer with touch of the farmhouse ale about to my mind, creamy with a hint of sour
Followed up with a Brunswick Bitter, a nice beer, not overly bitter and somewhat creamy,
Mornington Peninsula Brown Ale, called something else this might be a reasonable beer but it is not my idea of a brown ale, it is too black too bitter, not smooth or mild or creamy so all it a porter call it a stout but not a brown, but as they have then I will assess it by my understanding of a brown and so on untapped I will give it a 2.
Moondog love tap double tap IPA,ma touch of hoppy perfume or floral taste dry not overly hoppy very pale in colour

Young And Jackson
I wasn’t meant to be here but it is diagonally opposite to the Beer De Nord which is where I was heading so I am having a Thunder Road Terry,s Ale, I don’t know anything about it but until li look it up I would guess it is a summer or golden ale more golden ,,, 2.5 U/T . It is supposed to be an English Bitter ,who knew and it is by the same people who make Brunswick Bitter

Beer De Luxe Bar
Rogue TapTakeOver
Rogue Hazelnut brown,Muddy,looks like the bottom of the Yarra, you can taste the nuts , I take their word they are hazelnuts, got me buggered, won’t sell me a small glass but the bloke next next to me got a glass half the size . Full marks for responsible service of alcohol. The beer is pretty good but not a standout.
Shakespeare oatmeal stout ,, a bit rough for an oatmeal stout, also becomes thin and watery. Also had a taste of the Dead Guy Ale which was an Imperial Pilsner and a Pumpkin Ale I think was called Chatoe.
Had a bit of a chat with the main bar man who gave me a taste and also agreed with me about the insistence of serving in large glasses not being much use to anyone trying to try as many of the beers as possible, maybe they will look at their serving rules. De Luxe beers where a lot cheaper than Cookies, De Luxe was selling “The Beard” at four dollars a glass less. 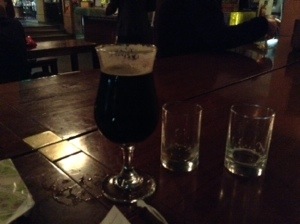