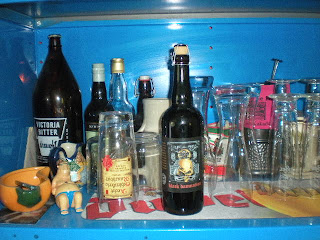 I went out with some my family last night to a restaurant in Blackheath called “The Escarpment” a relatively new one which I had never been to before. We had a very pleasant meal which I must admit was a bit pricey but no more than you might expect similar places to be. To my way of thinking the meal portions were a bit small and maybe a bit fiddly, That however could be the thing that would attract other people to the place.
As this was a BYO I chose to take a beer that I had been saving for a while. This was a beer from the DE Molen brewery in the Netherlands called BLACK DAMNATION  from what I gather this is a blend of Black Albert and Hell Damnation and is a coal black beer of 13% ABV and is described on the label as being a massive stout. I find this beer pretty hard to describe as it changed at least three times in the drinking. The first glass was very heavy and you where left wondering if we would get through the bottle as is what I think can only be described as being a “fat” molasses’y  beer.  I must say here that we were using wine glasses and only filling them up half way, and by this time we had got down to only two drinking the beer as the others found it a bit overpowering. The second glass and the beer seemed to become a bit fizzy and lighter which may have something to do with it warming up a bit and having been open for a while and so was easier to drink. By the third and unhappily the final glass of this beer it had changed again, I was up to the cheese platter of the meal at this stage and the beer was beginning to have the texture of a liqueur and I cant even begin to recall all the flavours and characteristics. I was told that this was one of the great beers and I don’t think I would argue that. definitely a beer for special occasions , that is if you can find one.

This entry was posted in BLACK AS COAL. Bookmark the permalink.