AN EVENING WITH CECILIA 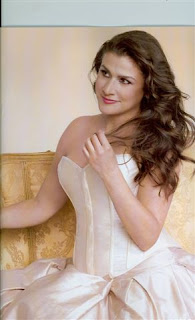 I went to see Cecilia Bartoli at the Sydney Opera House yesterday. She would have to be the best singer, the most accomplished performer I have seen or heard perform live.It was all in Italian, well maybe a song or two in French, but as I don’t understand either lets stick to all in Italian and seeing as I don’t really know a great deal about the technical side to music, I just had to go with the emotion. I cant imagine any other singer that could beat this but I hope that I will get a chance to see Emma Kirkby one day.
Anyhow moving on Oh yes I remember a point I was going to make first. I went in on the bike, as it takes me a couple of hours to get in to town, I left to get in in time to pick up my ticket from the box office and go and have something to eat and maybe a beer or two which with the show taking a couple of hours would give me a plenty of time to be good to drive home and not worry about booze buses.With all this in mind my plan was to put bike hat and coat in the cloak room and go off for a couple of hours. Of course that didn’t work because while the Opera House was open and a going concern. shows going on in all the various theatres nearly all day, the cloak room for the concert hall didn’t open until an hour before the concert and the cloak rooms that where open for the other shows wouldn’t take the gear, so I ended up lugging the stuff around for a couple of hours, which was a real pain in the arse, you would  think, at least I would think that it would be a good business plan for these places to offer this or any other sort of attraction/inducement in order to get the paying great unwashed in.
Anyhow again back to moving on. I had a meal at the Paragon hotel which is directly opposite Circular Quay, a pity half of the place has been taken over by Mcdonalds but it is still a not bad pub the meal I had was good a judging by the ones I saw been taken to other tables the rest looked ok to. I had a Fat Yak apart from that the beers on tap where a bit ordinary. I then went on to have a look at the Ship Inn, I didn’t eat here so cant comment on the food but I wasn’t particularly over awed by this pub but there is a bit of street seating so it would be a good place to sit and watch the passers by passing by especially on a nice
sunny day, seemed to be mostly back packer types when I was there.
I wonder if it is legal to reproduce a scanned picture Cecilia in this blog, I will give it a go tomorrow and see if I get arrested
I have taken the chance with the copywrite police and added a picture of Cecilia which I scanned from the the program I bought at the Sydney show, and lets face it the picture looks much better here than in a closed book

This entry was posted in BARTOLI AND BEER. Bookmark the permalink.